Presley. Probably the lightest horse I've ever ridden. He'd so anything I asked with the slightest bit of leg. Wonderful guy.

Here's the story of Presley, an off-the-track Thoroughbred I knew at the rescue.

A young girl in Kansas who'd earlier adopted a horse from us sent a text about Presley who was just then at a kill pen in Texas, just over the border from Mexico. He was due to be shipped over soon and slaughtered.

Barb drove down and retrieved him and three other lovely ponies, all of whom had strangles. That was fun for everyone, having to disinfect each time you fed--bleach was the thing we used. They all came through that fine and were really great little ponies in the end--very well made and quite personable.

But back to Presley. When I met him the day after his arrival he was depressed, dehydrated, and skinny. He was in a quarantine stall behind the barn, just standing there with his head down and dead-eyed when I walked up to him.

I began massaging his withers and neck gently and he seemed to perk up a lot. I can only imagine how terrified he was in the atmosphere at the kill pen.

Above is another little guy who was about to be destroyed, and he was under a year old at the time.. Eventually he grew up, turned a beautiful steel gray, and was adopted by a little girl who adores him!

As for Presley . . . after a time, he began putting on weight and I started working with him. He was one of the sweetest horses I'd ever known--and big, close to 17 hands if he wasn't actually 17, I never measured him. And he'd do anything I wanted--effortless figure 8s in the arena as if he'd done them all his life. Change of direction, stop, transitions up and down. He was a wonderful guy and I just adored him.

But . . . one day he'd be moving fine, the next he'd be off. Fine, then lame. We couldn't figure it out. So we loaded him up and took him down to a good ole boy vet in Jackson, MO, Linus Huck, who I swear is a genius. And look what he found in Presley's leg.

We'd lifted his lip, of course, but couldn't read his tattoo. He'd been a racehorse, that was certain. Dr. Huck said an operation like this cost upwards of $10,000.00 so someone was trying to get Presley back into racing.

After the trip to Huck Equine, I called every major veterinary hospital in the country, from the east coast to the west, and from the north to the south. Several of them asked to see the radiograph, but all said that it wasn't their work. I was never able to find out any more about this darling guy--not his racing name, not where he was from, nor what had happened to his leg.

I had high hopes for him in terms of adoption because he was so easy to ride and had beautiful, gentle gaits. Plus he is as sweet as the day is long, and beautiful.

But the radiograph put an end to those hopes. Presley (we named him after the little girl who'd brought him to our attention), was never going to be a hunter-jumper, dressage, or any other sort of performance horse.

Maybe trail riding, if the owner was understanding. Certainly a wonderful companion for anyone who desired a horse who was smart, loving, and adored humans.

Here's a really good outcome for an OTTB--above is Harry just off the track (so athletic!), and below is me showing him to the woman at left who bought and loves him. I think he was only with us a week before his adoption. Barb and Harry are playing kissy face to the right. :) He's obviously a very big guy. 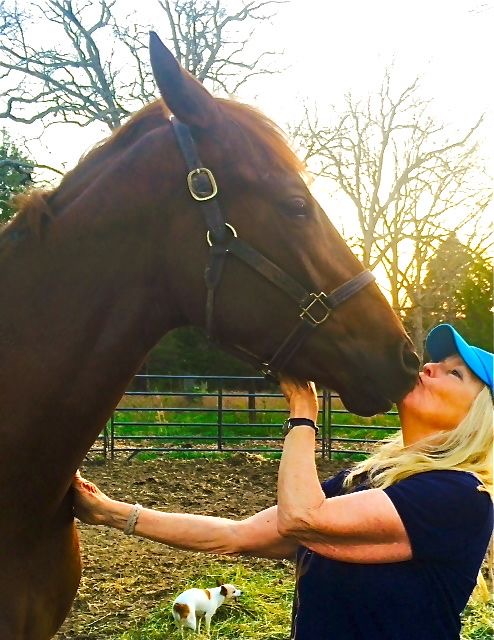 Presley's story sounds like a sad one, compared to Harry's, doesn't it? And yet . . . I thought about what Presley was destined for, terrified in the kill pen. He was quickly running out of time when he came to us.

Here's a closer look at that world.

About 200,000 racehorses are bred each year. Thirty-five to forty percent of them will never see the racetrack. And worse, only 0.2% of them will race in Grade 1 stakes races, the rest of those who do make the track are destined to race in low-level races at very poor facilities and not cared for well at all.

The ones who don't make it on the track could well be among the 130,000 horses herded onto trailers each year and sent to slaughter. It's estimated that at least 10% of those are racehorses. That's about 13,000 racehorses per year.

How is this horrible practice accomplished?

According to the Washington Post, horses are "crammed into trucks or trailers . . . without food or water to be slaughtered under often brutal conditions. Exhausted, terrified, dehydrated and hungry, these horses are usually shocked and bled-out [to kill them]. Sometimes, when the shock is incorrectly administered, as is often the case, horses are skinned and dismembered while still conscious, according to the Humane Society of the United States."

So . . . no Presley will never jump a single fence or compete in even one dressage arena. But he's still living in the back pasture with his good buddies, alive, well, and --I'm so glad to say--happy.

I'd say that's a pretty good outcome, all things considered.

What You See Is Who You Are