Horses are prey animals and are always looking for a leader who can keep them safe. In our little herd of two, that better be me. Dorian is 1200 pounds to my 120 or so, which puts me at a decided disadvantage in the event something scares him and he doesn't have confidence in himself or in me that allows him to be calm.

. . . Be calm and not react as prey animals do--by bolting, bucking, or wheeling in the blink of an eye and galloping off in the opposite direction, right over me if I'm in the way. And those have all happened!

That erosion of confidence is exactly what occurred through a series of freaky experiences that occurred in close proximity. One, going across the creek on a muggy, buggy, tall-weedy day, I've chronicled in a pervious post. But the very same day, I took Dorian into the large outdoor arena and his girth and saddle slid underneath his belly (sending me to the ground on my backside!) leaving the stirrups to clank and bang beneath him. All his prey alarms went off at once.

"A great leader leads the people from within them."--M. D. Arnold

He freaked out, terrorized, and raced around the arena in a mindless frenzy. He charged right at me, but veered off--he wasn't trying to harm me, he was mindlessly fleeing the clanging predator who'd suddenly appeared under him. He was completely out of control but finally came to a halt at the far end of the arena, trembling and snorting.

I was able to unhook the saddle, letting it drop to the ground and lead Dorian--still a nervous wreck--out of the arena and back to the barn. These experiences (and a couple more) eroded Dorian's self-confidence and his confidence in me as a leader who could and would protect him.

And then he got spooked and stepped on my foot. Twelve hundred pounds and steel shoes equals a broken toe.

The necessity for me assuming a leadership role had escaped me, and that put us both in danger. Thank goodness I finally woke up!

I realized we had to go back to square one and build that relationship again. Or maybe it was that we needed to rediscover it. Me in the leadership position, and Dorian--quite relieved--in the follower position, happy to have me keep him safe.

Here Dorian is trotting and cantering off lead as I stand in the center of the arena giving him commands. Good boy!

We went back to groundwork. I led him forward, to the right and left, making him keep up with me and stop when I stopped. We did that off lead, too. I sent him in circles around me on his lead, then off lead, making him turn, trot, walk, halt, at my command. And so on . . . I insisted he listen to me, pay attention to me, obey my commands and then my wishes, only displayed via body language.

At first it took insistence. He tested me, pushed my boundaries, reacted out of fear rather than confidence.

In the end, though, things turned out better than before all the mishaps. The obstacle pictured below was something Dorian was terrified of before all this happened. As a result of our work together, he willingly crossed it at my suggestion from the side. He didn't require I lead him over it. Great progress. 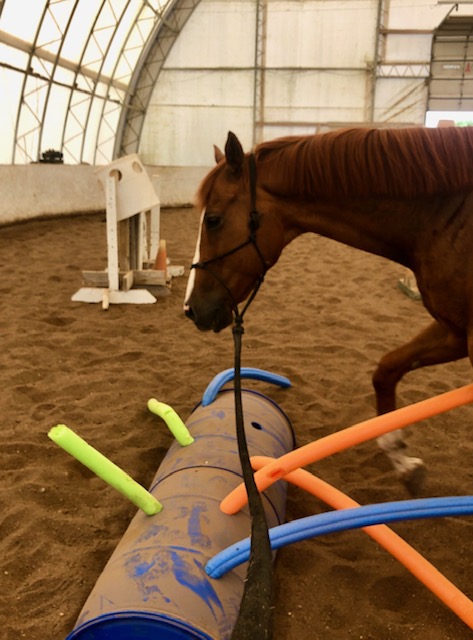 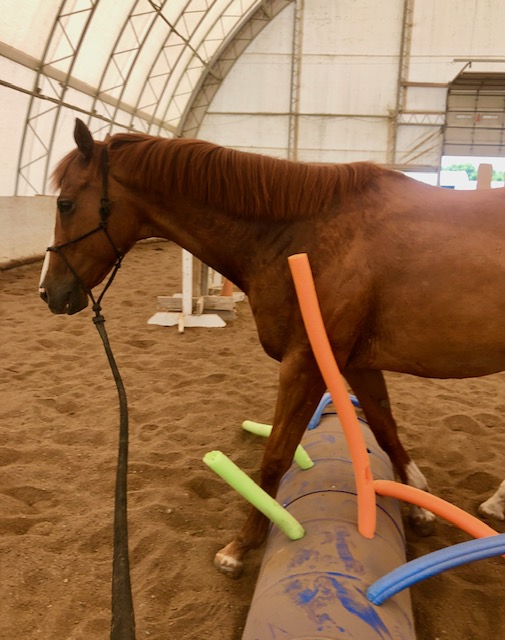 Here's another case in point: In the indoor arena, Dorian had refused to let me mount him, moving his hind end away as I stepped onto the mounting block. That was a fun game we played for a while--until I reasserted my role as leader.

That took patience coupled with insistence. For example--in the indoor arena, I had Dorian in his halter and brought him around to the mounting block. He moved away. I backed him up, hard at first, glaring at him to send the message that this behavior was not acceptable. This exercise happened after we'd already been successful at lower stakes exercises.

"A leader is a person you will follow to a place you would not go by yourself."--Joel Barker

The moment he stood still and calm at the mounting block, we ended the session with a lot of "Good boys." It took one day for him to round the mounting block in his halter and stand quietly. Next step, do it with his saddle on.

Once he stood there quietly with me on the mounting block, I threw my leg over him and into the saddle. I sat there for three seconds, got off, gave him a lot of praise, and ended our session.

In all the work we did together, the moment Dorian did what I asked, that exercise was over. We never worked longer than 30 minutes and often only 15-20 minutes.

Dorian being just fine with a huge pink container hoisted above him and then gently swinging to his head.

It took less than a week to get back to our normal--me in charge and Dorian so very relieved and happy about it. He went over an obstacle he wouldn't dare even approach prior to our meltdown, tolerated large objects settling on his head, walked through others . . . so all-in-all, the experience resulted in us accomplishing more rather than less, than before.

I realized that in order for us to truly have a partnership, Dorian needed to see, believe, and experience me as his leader--as the one capable of keeping him safe. Horses will do most anything you ask of them--they'll be very willing partners--but you first have to demonstrate you're a reliable leader who will not lead them into danger.

I've been thinking about what I've learned about leadership in a larger way. We're seeing models of both effective and non-effective leadership in our country today--leadership through fear is short-lived, while leadership based on sound principles, truth, and a spirit of benefit for all has staying power.

"The supreme quality of leadership is integrity."--Dwight D. Eisenhower

But I've also been thinking about how we lead ourselves.

Dorian in his first show. He loves Calla and she handled him very well.

When we become adults, we take charge--we become our own leaders. And as I noticed with Dorian, who really is a very good boy and wants to do what I want him to, we are all happier when we're being our highest best selves and feel useful, protected, and loved.

That, to me, is the essence of my partnership with Dorian--assuming the leadership role so he and I can partner from a place of mutuality. Respect and confidence translates to self-respect and respect for each other. It's a unified relationship without seam or rent to inhibit our progress and joy in our activities together.

"Becoming a leader is synonymous with becoming yourself. It is precisely that simple and it is also that difficult."--Warren Bennis

That issue, though, of achieving our "highest best selves" --one that's freeing and satisfying--often takes as much patience and persistence with ourselves as was true in my experience with Dorian. There are are plenty of temptations to fail at achieving that self. And plenty of recriminations and often self-condemnations that follow.

Those are unnecessary and hinder our progress. But for me, being firm with myself and not accepting anything but progress in uncovering and discarding what's not supportive of my "best self" is a discipline requiring alertness, commitment, and sincerity.

Something we can all do if we just put our minds to it!